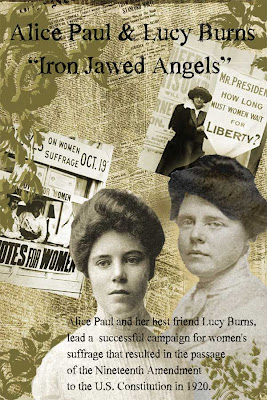 Well, the second piece for Soartful Saturday did come together after all--thanks to the Three Muses and their Newspaper challenge. Here is a postcard, Iron Jawed Angels. This piece was inspired by Kimberly Decker and her Free Trinkets and Treasures blog, where she's doing a series of posts for Women's History month. Alice Paul and Lucy Burns were among the women campaigning for the 19th Amendment. They took on the established Women's Suffrage movement, launched an international campaign, picketed Congress and the White House, were arrested and beaten by police and went on a hunger strike while in jai. They were ultimately successful, and women everywhere benefitted. There's a wonderful TV mini-series about their struggle, called, oddly enough, Iron Jawed Angel.
When I was Googling Women's Suffrage, looking for the background bits, I came upon many headlines--which brought me to the Muses challenge. So Here's a One for Two special.
The texture is from nyker99 at T4L, the photos from Kimberly's blog site. The newspaper bits are from Google.
Thanks for visiting.
Posted by Linda Gibbons at Thursday, March 11, 2010