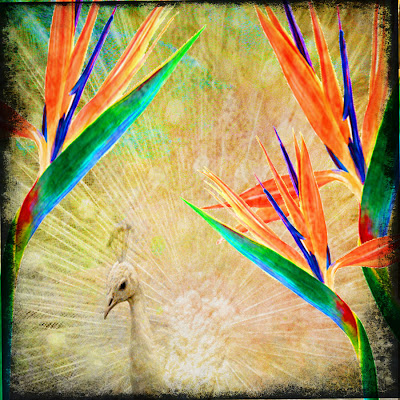 Another fascinating theme this week. I find, as I evolve as a digital artist that I enjoy the "theme" challenges far more that the ones where the image is provided. I am learning to take a theme and run with it, thinking and creating outside the box...It's certainly harder, but more fun!

So here are my Exotic Birds.
The white Peacock is a public domain image from Wikimedia; the bird of paradise flower is a botanical image altered a bit with blending modes and layering.
The background was made with many bits from Jerry Jones, who is the person behind Skeletalmess, Shadowhouse Creations and My Second Skin Collections. He generously shares his amazing textures, brushes and tutorials with everyone. If you don't know this guy's amazing work, check him out!
Other bits from Witchy13's Dirty Grunge Papers collection.
Posted by Linda Gibbons at Sunday, February 27, 2011 9 comments: 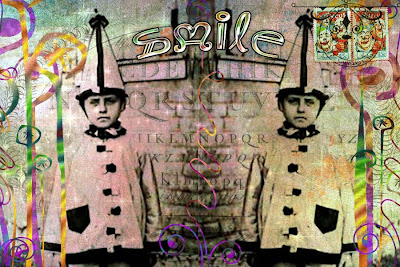 Our challenge was to take an image--any image--and use it at least twice on our postcard this week. This sad little clown always makes me smile, and has been pleading with me to use him whenever I scroll through my images.

I hope he makes you smile too.

I don't remember exactly where I picked him up, but he's on a lot of free image sites, so thank you, everyone for posting him.
The background was made with bits from Songbird Avenue's Port Au Prince and Light the Night collections and the beautiful pinky piece is by Mbgrigby at T4L. All were altered with blending modes.
The rainbow bits were done with brushes and layer styles.
Posted by Linda Gibbons at Sunday, February 27, 2011 13 comments:

Alphabet Inspired-K is for Kabuki 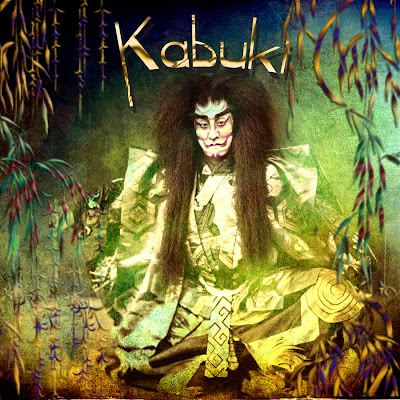 Is anyone else having trouble uploading images to Blogger. I can't do two at a time any more; sometimes I get a "cannot display the website" message in the upload window; and I have to upload the dame file twice to get it to appear in the post...[sigh]

Anyway, here is # 11 in the alphabet inspired series--K is for Kabuki.

Kabuki (歌舞伎, kabuki?) is the highly stylized classical Japanese dance-drama. Kabuki theatre is known for the stylization of its drama and for the elaborate make-up worn by some of its performers.
The history of kabuki began in 1603 when Okuni of Izumo began performing a new style of dance drama in the dry riverbeds of Kyoto during the Edo period. Female performers played both men and women in comic playlets about ordinary life. The style was popular instantly and rival troupes quickly formed, and kabuki was born as ensemble dance and drama performed by women—a form very different from its modern incarnation. Much of its appeal in this era was due to the ribald, suggestive performances put on by many troupes.

Today, kabuki remains relatively popular—it is the most popular of the traditional styles of Japanese drama—and its star actors often appear in television or film roles. For example, the well-known onnagata Bandō Tamasaburō V has appeared in several (non-kabuki) plays and movies, often in a female role. Kabuki is also referenced in works of Japanese popular culture such as anime. (from Wikipedia)

Photograph of 19th Century Kabuki actor from the Peabody Essex Museum collection
Background made with a piece from JoesSistah at T4L.
The foliage is a PS brush set called Japanese1 by Darkgarden from Deviantart.
All were altered with filters, layer styles and blending modes.
Posted by Linda Gibbons at Saturday, February 26, 2011 1 comment: 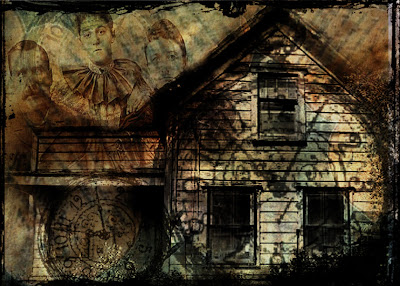 Two things I can't resist in a challenge--the theme of time and a picture of an old house!
I combined the two in this piece. The house spoke to me so eloquently of the passage of time-children growing parents aging, live being lived. It semed an apt symbol.
The house image was provided by Rick St Dennis at Collage Obsession.
The timepiece is a piece of clipart; the text is from Graphics Fairy, I think; I don't remember where the family portrait is from.
Background created with pieces from Fudgegraphics and Temari09.
Lots of blending modes were applied.
Posted by Linda Gibbons at Wednesday, February 23, 2011 9 comments:

Alphabet Inspired-I is for Invention and J is for Japanese 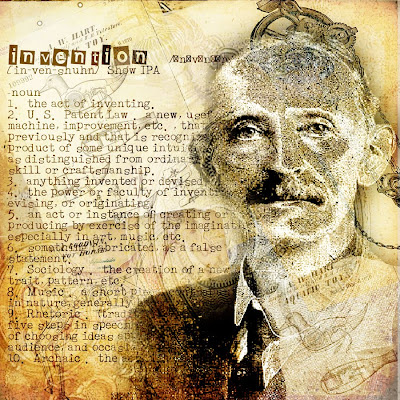 I is for Invention
Background bits from Google Images and the Graphics Fairy. The main image is an old piece I found online in my earliest days collecting images. I even copied it onto a word document instead of saving it as a jpeg. I do love how it looks though. 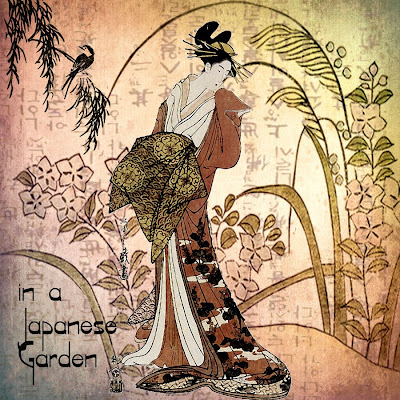 J is for Japanese
In this case a geisha in a Japanese garden. All the images are from Dover except the text, which was Googled. I'm always a little wary of using text when I really don't know what it says, but the original piece is pretty old and is in a museum in Japan, so I'm betting it's okay...
Posted by Linda Gibbons at Monday, February 21, 2011 2 comments: 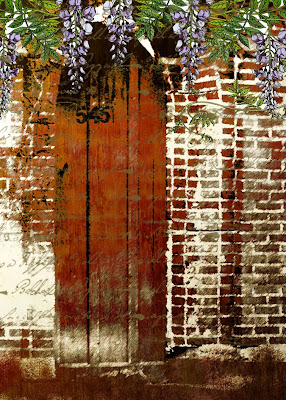 I love photographing doors. I like to think about what might be behind them--the joys they savor, the sorrows they contain, the secrets they keep--the lives they guard.
I took this photo at the end of last winter, of a door in a high brick wall surrounding what might have been a fine house with a beautiful garden (though NOt so much at the end of last wiinter , which was a messy one.)
OR it could have been a derelict garden and an abandoned, falling down house. I couldnt see beyond the seven foot wall...
The photo was embellished and altered with filters and blending; gradients and a texture piece were added; and the wisteria is a free image from Dover, just to add a little beauty to the mysterious door.
Posted by Linda Gibbons at Monday, February 21, 2011 8 comments: 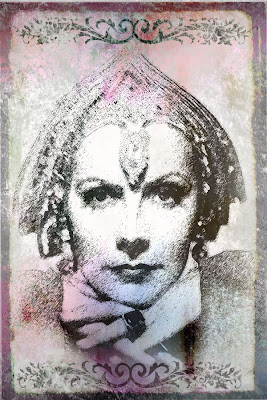 Here's my entry for SPA's Faces challenge. I went looking for a very compelling face for this piece. It was either Mother Theresa or this one. I do love Mother THeresa's beautifully serene face, but this one...

Background made with texture pieces from Encounter_laura and DanSnyder at T4L; the photo was googled (it's from an ad for diamond jewelry from the Deco period)and altered with filters. The rest was done with brushes
Posted by Linda Gibbons at Sunday, February 20, 2011 7 comments: 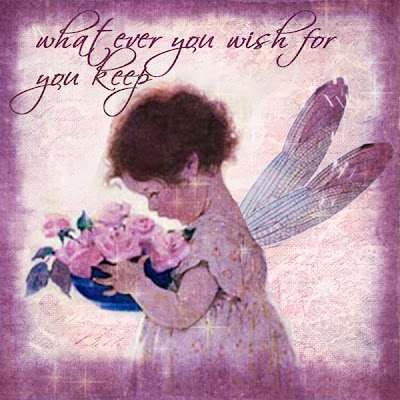 How can anyone resist this theme? Putting wings on tiny children--it just makes me happy.
I love this illustration, a freebie from The Feathered Nest. If you've never been there, you should visit. Dawn's artwork is wonderfully shabby chic, and there are art freebies and tutorials for how to create some of her treasures. All of you who are "hands-on" artists will love it.
The background is made with paper from Songbird Avenue's Light the Night Kit, textures from Tanya at T4L and a couple of my own, embellished with brushes and selective erasing.
Brushes are from three of my favorite sets, Poldersky, 82nds of Light and Grunge set 2 by Skeletalmess at Shadowhouse.
You may recognize the quote from Walt Disney's Cinderella.
Posted by Linda Gibbons at Saturday, February 19, 2011 3 comments: 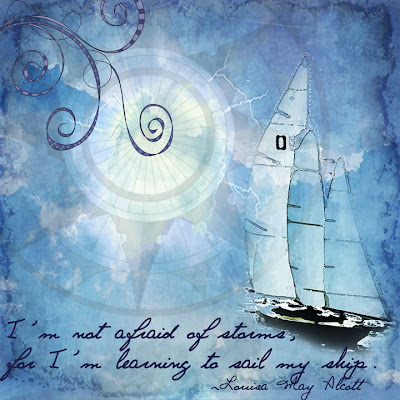 I'm not a journalist, but I am always in awe of those who have the ability to express themselves in words. I am also fascinated by journals, especially art journals. Some of the ones I have seen here in Blogland are just amazing--incredible marriages of art and words.
So when a group I belong to started a digital journal page swap, I HAD to try to participate.
Here's my first page. The dimensions are 8 x 8. The quote is from Louisa May Alcott, and I think it's very appropriate as I begin this journalling journey.
We'll see what happens...
Posted by Linda Gibbons at Friday, February 18, 2011 1 comment: 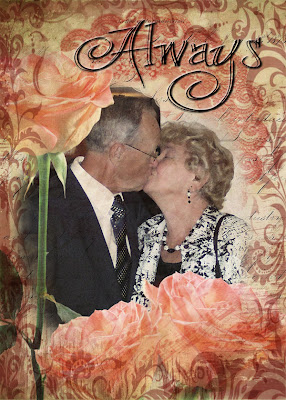 A photo of my Mom and Dad on their 60th Anniversary.

Background made with pieces from Pareeerica and Norma_Frances at T4L; text piece from the Vintage Moth; rose from Scrapbook Flair and PS brushes from Stephanie Shimerda at Obsidian Dawn.
Posted by Linda Gibbons at Sunday, February 13, 2011 19 comments: 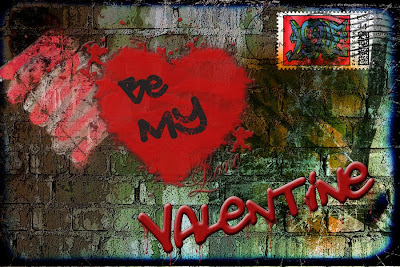 Hearts are everywhere this week and Valentine's Day is almost upon us! I made an urban postcard for this week's challenge, something a bit out of the ordinary.

The wall background is from Textures for Layers, and the TTL overlay is from Jessica Sprague. The heart is a brush, and the graffiti bits are from Media Militia.
Posted by Linda Gibbons at Saturday, February 12, 2011 14 comments: 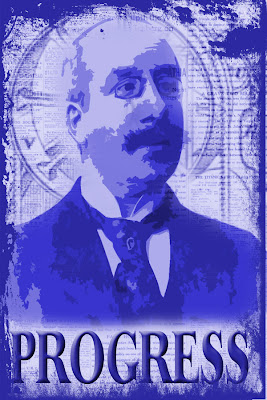 A really fabulous image of a handsome gentleman was provided for us to use this week at Art Creations Friday. He was looking toward the future and looked to me like he might be a politician so I made a campaign poster for him.
Image provided; newsprint from Google Images. The rest was filters, blending modes, layer styles and brushes.

Thanks for visiting.
Posted by Linda Gibbons at Friday, February 11, 2011 8 comments: 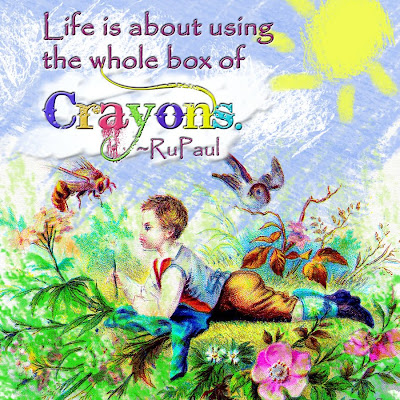 I made this piece for my Alphabet Inspired set--I'm up to "I" and am lacking "inspiration"--how "ironic"...
But this one is C for Crayons, and I just love this quote by Ru Paul.

Image from the Graphics Fairy. Background created with Crayon Scribbles brushes I found on Deviantart.
Posted by Linda Gibbons at Wednesday, February 09, 2011 10 comments: 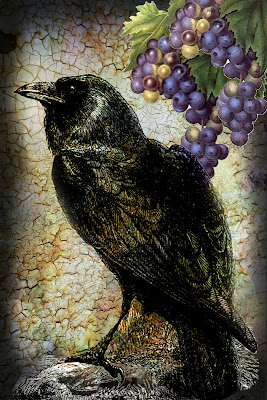 Corvus Corax--the Raven
Image from Google Images, as are the grapes.
Backgrounds made with bits from Encounter Laura at T4L and a rusty crackle piece from Elizabeth at Last Door Down the Hall
Posted by Linda Gibbons at Monday, February 07, 2011 7 comments: 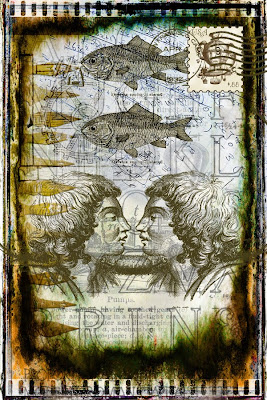 Please don't ask me where this came from...I struggle with Steampunk, and don't really understand it. That said, I am quite pleased with this piece.
Background made from an old film texture by Struckdumb at deviantart, as well as bits from the Graphics Fairy and Google Images. The rest are PB brushes from sets by Hogret (Steampunk Bizarre) and Obsidian Dawn (postage).
Thanks for stopping by.
Posted by Linda Gibbons at Sunday, February 06, 2011 8 comments:

And RED all over

All elements from Media Militia's patterned Spheres. I added the red! 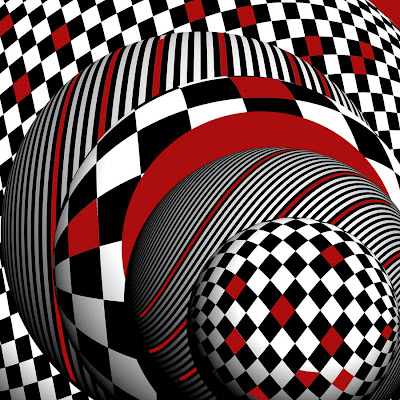 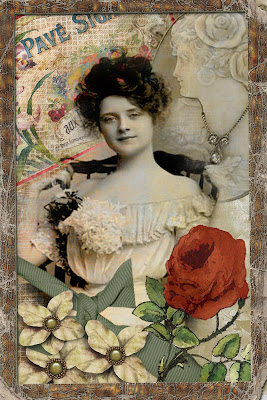 This is not, I repeat, NOT one of my relatives. They were not so colorful or used to posing uncorseted and in their Scanties.

Image from a collage sheet by Gaby Braun, elements from Scrapbook Flair, Suhura's Vintage July set and Songbird Aveue's Port au Prince collection. Background made with bits from Shadowhouse and Graphics Fairy, along with some grungy brushes.
Posted by Linda Gibbons at Tuesday, February 01, 2011 9 comments: