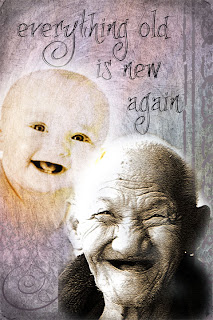 This challenge, along with spending time with my family this Christmas, got me thinking about how amazingly the human race constantly renews itself and the vast road of experience we all travel on the journey from birth to death, youth to age, new to old.
Who knew that having this blog would lead to deep thoughts...

Anyway,
the images were googled, the backgrounds are from Emma Cox and Dan Snyder at Textures for Layers.

Thanks for visiting
Posted by Linda Gibbons at Wednesday, December 30, 2009 10 comments: 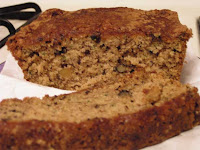 My sister, sister-in-law, daughter and I all received a wonderful surprise Christmas gift form our Aunt Yvonne this year. it was a a loaf of Zucchini Bread made from our great-aunt Clara's recipe. But even better, we also got the RECIPE! It's probably not a secret recipe, but oh my, it's good--mine is almost GONE already!

My Aunt Clara was a hairdresser and had her own salon, with my Uncle Bobby and his wife, Terry. I had my first haircut there, which I don't rremember really, because I was very young. Uncle Bobby always said he had cut off enough of my hair "to stuff a matttess" every time. He cut my hair throughout my childhood--until I graduated from high school.
My mother went every week to get her hair done there, and still goes to the salon, though not as often. Bobby retired quite a while ago, and Aunt Clara's been gone for many years.

And here's the recipe. Do your part to rid the world of surplus Zucchini!

Preheat oven to 350’
Grease or spray pans with non-stick spray.

TO BAKE
Divide mixture between pans
Bake at 350’ for 15 minutes
Turn oven down to 325’ and bake for 1 hour (adjust time for smaller loaves)
Loaves are done when toothpick comes out clean. 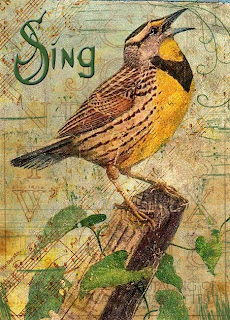 Still in a musical mood.
Here is my entry.
Background from Bittbox, bird image and musical scraps from Graphics Fairy, I think. I don't know where I found the alphabet, but isn't it great?
Posted by Linda Gibbons at Sunday, December 27, 2009 4 comments: 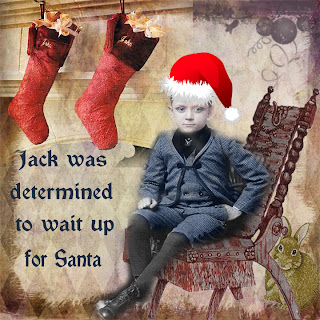 I recieved an invitation this morning to join in the Soartful challenges.
This is all so much fun!

Here's my entry. I'm relaxing, but Jack's not quite ready yet.
Backgrounds are from Bittbox and from Rubyblosson at Textures 4 Layers. Jack and Bunnie are from Dover, and the stockings were googled.
Thanks for inviting me.
Posted by Linda Gibbons at Saturday, December 26, 2009 5 comments: 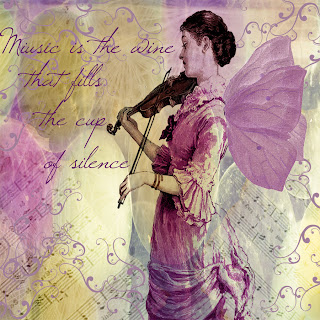 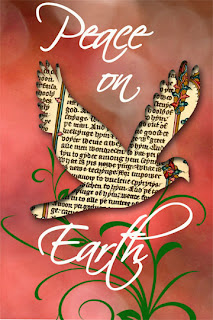 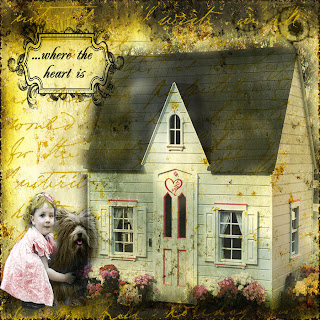 Ladies,
I know I'm posting twice with the same entry, BUT now I have a blog!!!
So here it is again. Thanks for the encouragement.
Posted by Linda Gibbons at Thursday, December 24, 2009 11 comments:

I know what I want my first real post to be...a big THANK YOU to all of the people I have "met" through the blogs, Yahoo groups and Flickr sites that I have visited since I began this journey a little over a year ago.

This extended community of artists and craftspeople is so welcoming and encouraging to everyone. You all have given me the courage to put my own photographs and pieces of art up for all to see. I have learned so much from all of you who are so willing to share your knowledge and ideas.

This is going to be fun! 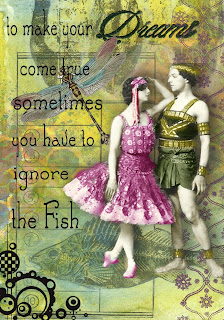 Well, I did it! I started a blog.
Now what?
Posted by Linda Gibbons at Thursday, December 24, 2009 No comments: