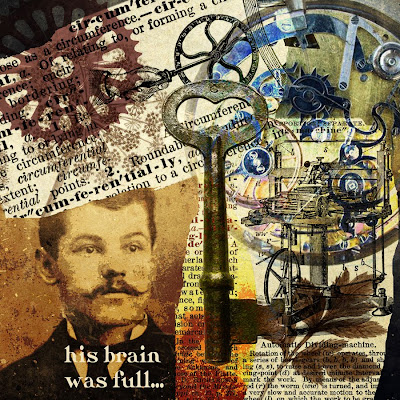 Here's my steampunkster...full of gears and ideas and keys and clockwork.

Bits from Cecelia Swatton's steampunk kits and Cindy Powell's too. Dictionary pages from the Graphics Fairy and textures from Shadowhouse.
Posted by Linda Gibbons at Wednesday, March 30, 2011 5 comments: 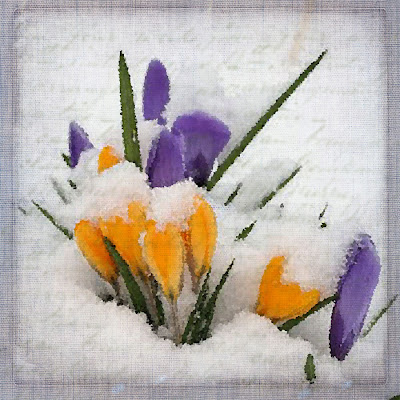 Flowers in the snow

It's such a blessing to see the earth renewing itself in spite of all odds!

Image from Google
Background made with bits fromRubyblossom at Frames Free for Use Flickr Group and some PS brushes.
Posted by Linda Gibbons at Sunday, March 27, 2011 8 comments: 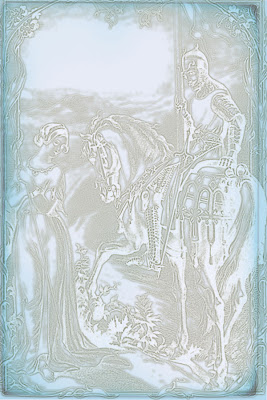 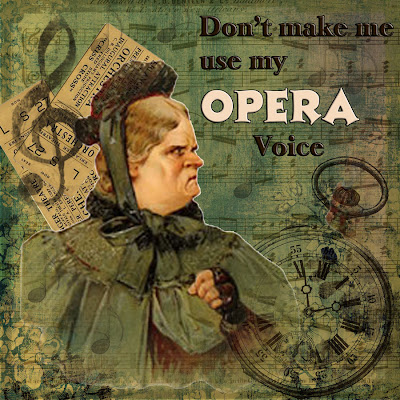 I've been wanting to use this Victorian woman image for a while now, but couldn't find the right place for her, because she's --well--ODD.
She's from a Dover free sheet, the watch from the Feathered Nest, the tickets from Free Collage Images and the background made from a piece from a Songbird Avenue kit, a gradient layer and lots of brushes.
Posted by Linda Gibbons at Friday, March 25, 2011 7 comments:

Alphabet Inspired-M is for MArcus Aurelius 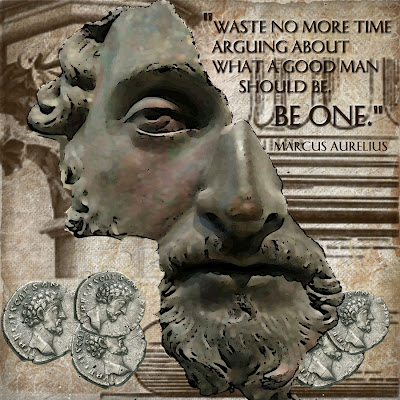 Marcus Aurelius Antoninus was Roman Emperor from 161 to 180. He ruled with Lucius Verus as co-emperor from 161 until Verus' death in 169. He was the last of the "Five Good Emperors", and is also considered one of the most important Stoic philosophers.
Marcus Aurelius' work Meditations, written in Greek while on campaign between 170 and 180, is still revered as a literary monument to a philosophy of service and duty, describing how to find and preserve equanimity in the midst of conflict by following nature as a source of guidance and inspiration. The meditations serve as an example of how Aurelius approached the Platonic ideal of a philosopher-king and how he symbolized much of what was best about Roman civilization.

Some quotes from Meditations:

"Dwell on the beauty of life. Watch the stars, and see yourself running with them."

"It is not death that a man should fear, but he should fear never beginning to live."

"The universe is change; life is your perception of it."

"If someone is able to show me that what I think or do is not right, I will happily change, for I seek the truth, by which no one ever was truly harmed. Harmed is the person who continues in his self-deception and ignorance."
Posted by Linda Gibbons at Monday, March 21, 2011 1 comment: 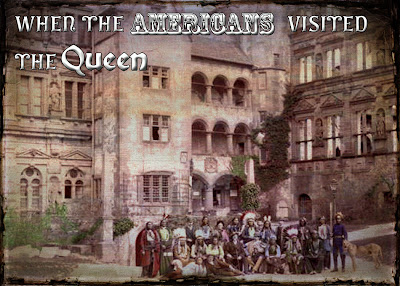 When the Americans visited the Queen...

I found this great old photo on Smugmug. I don't know if it's England or not, but it surely is cowboys and Indians.
Altered with textures from Zen Textures and Shadowhouse and hand colored.
Posted by Linda Gibbons at Sunday, March 20, 2011 13 comments: 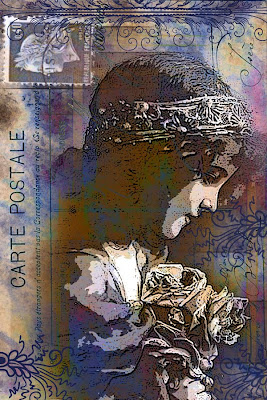 It was so hard to decide which "fair maiden" from my collection should get to play in this week's challenge. I chose this beautiful child from Suzee Que's collection.
The background was made with bits from T4L and Untamed Reflections, along with some filters and brushes.
Posted by Linda Gibbons at Sunday, March 20, 2011 12 comments:

Art on the Dark Side--Rueful Renaissance 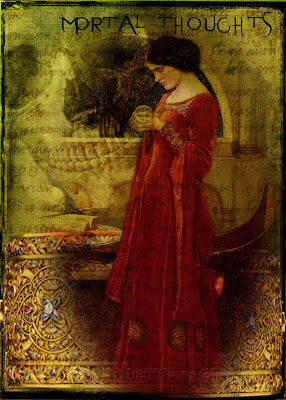 I haven't played here in a long time...nice to be back on the Dark Side for a while.
Images from Dover and Google, along with a texture from SkeletalMess and a gradient layer. Lots of filters and blending modes were applied as well.
Posted by Linda Gibbons at Saturday, March 19, 2011 3 comments: 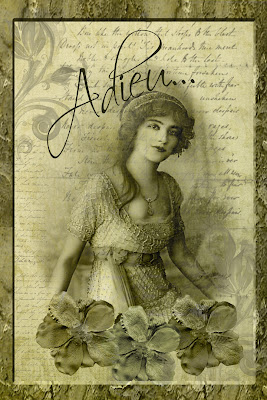 Goodbye to the wonderful Art Creations Friday Challenge. We will all miss the beautiful images and fascinating backgrounds these creative ladies provided for our inspiration every week.
Thank you all for your hard work, your inspiring challenges and your warm and thoughtful comments.

We will miss you!

This was made with bits from Shadowhouse, Scrapbook Flair, HZDesigns and Songbird Avenue's Light the Night collection, along with some wonderful PS brushes.
Posted by Linda Gibbons at Saturday, March 19, 2011 6 comments: 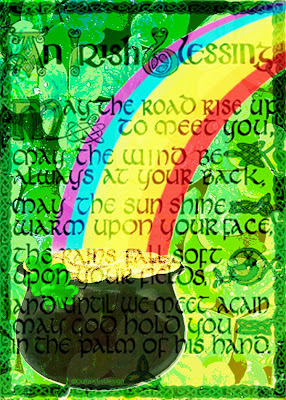 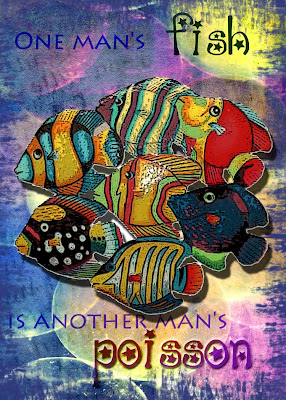 I didn't think fishies gould be so much fun. I found these gorgeous guys on Google Images, and the quote is from Brainy Quotes, with no attribution.
The background was made from multiple gradient layers and textures from Shadowhouse and Textures For Layers, ans some Photoshop brushes.
Posted by Linda Gibbons at Wednesday, March 16, 2011 12 comments: 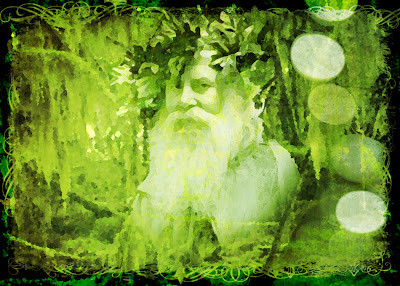 I have been so enjoying seeing the early signs of Spring, the tiny buds swelling, the jonquil leaves poking up, the moss looking alive again...not to mention the Shamrocks, Leprechauns and Irish flags sprouting all over my very Irish neighborhood.

Here's my entry for this week's challenge. I made a montage using two photos of mine--a shot of the rainforest in Washington state, the absolute GREENEST place I've ever been-- and a portrait of the Green Man, the guardian of the forest in Carver, MA, where King Richard's Faire is held every Fall.

I used textures from Cottage arts and from JoesSistah and Karrie Amelia at T4L. Lots of blending , filters and brushwork to add to the texture.
Posted by Linda Gibbons at Sunday, March 13, 2011 17 comments: 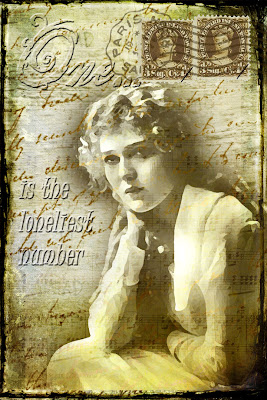 Here's my entry for this week, inspired by the old Three Dog Night song, "One is the Loneliest Number"
The original photo is of Mary Pickford from an old trading card. I remember buying these for a nickel at the amusement park Penny Arcade near where I grew up.
The background is made with pieces from Jerry Jones of Shadowhouse Creations--he has some fabulous free texture sets on his site!-- and a grungy music piece by Brenda Starr that I found on Textures For Layers. The rest is, as usual. the magic of Photoshop.
Posted by Linda Gibbons at Sunday, March 13, 2011 14 comments: 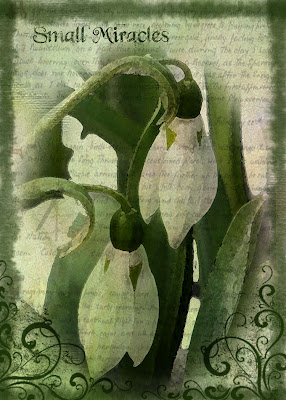 Two days ago I posted that I had lost my job after 12 years. Yesterday was to be my last day.
What I did not know was that the amazing and dedicated group of women volunteers I work with and for, had rallied and launched a full scale effort to extend my tenure at least through the end of May, so I could help bring a huge project to completion.
I can't say enough about these women. I love them all and am full of wonder and gratitude that they would do this for me.

So here is a collage in tribute to all of them.
Posted by Linda Gibbons at Friday, March 11, 2011 8 comments: 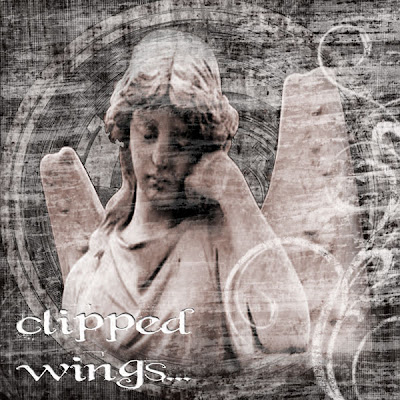 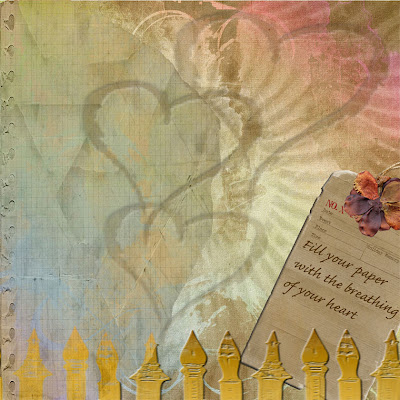 For the digital journal pages swap that I'm in. Still haven't journaled anything, but it's fun to collect and print the pages.
Posted by Linda Gibbons at Tuesday, March 08, 2011 No comments: 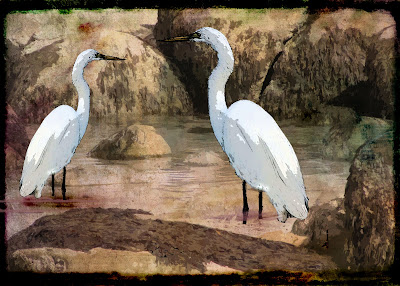 A glimpse at the life of shore bird, in this case, white herons, always on the hunt...
The original photo of the tidepool, sans birds, I took a few years ago, and found again today, while viewing some discs from and older computer. The bird came from Google Images. The background wac created with the help of texture pieces by Encounter_Laura and and others at T4L.
Posted by Linda Gibbons at Sunday, March 06, 2011 14 comments:

Alphabet Inspired--L is for Lion 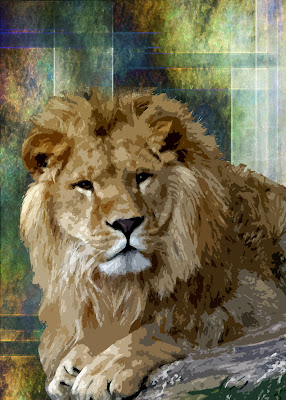 A Lion
Photo from Wikimedia, taken at the zoo in Antwerp.
Lots of filters used here.
The background made with 2 texture pieces from Untamed Reflections and one from Les Brumes at T4L
Posted by Linda Gibbons at Sunday, March 06, 2011 No comments: 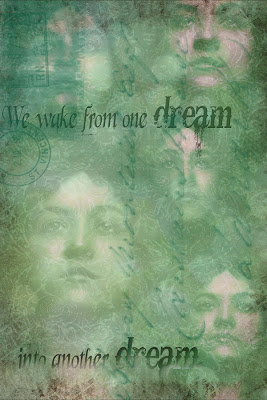 The background/overlay was created with pieces by Tanya at T4L and by Jerry Jonesat Shadowhouse, along with the application of filters, brushes and blending modes.
The quote is from Ralph Waldo Emerson, one of Americas Transcendentalist poets and philosophers.
Posted by Linda Gibbons at Sunday, March 06, 2011 7 comments: