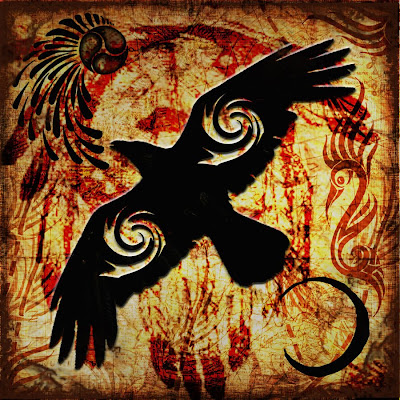 I made this piece after I did a little research on Ravens for another challenge. I found there is more to the raven than just perching over Poe's door.
Raven, the trickster, is a native American totem spirit. Native Americans of the Northwest considered Raven a mythic champion who stole the sun from a box where it had been concealed. Having done this he released it into the sky for the benefit of mankind. Other stories make the raven responsible for releasing the stars and the moon from bags and/or boxes where they had been kept hidden. Peter Goodchild, in Raven Tales (1991) has collected stories from the Pacific Northwest that celebrate the raven’s use of trickery and intelligence to transform the environment into something man can use. It is Raven who is responsible for releasing the sun, establishing a rhythm to the seasons and providing shamans with their visionary and healing powers.

Was created using Photoshop brush sets: Crow brushes by Emma Alvarex, Tribal set 1 by Stephanie at Obsidian Dawn, Easy Elements Swirls for the cut-outs on the ravens wings,Halloween vectors (the moon), and Sun brush pack (the sun).
Background textures from Shadowlands, Tanya at T4L and Jessica Sprague; map from Vintage Moth and other images from Google.
Posted by Linda Gibbons at Wednesday, April 07, 2010