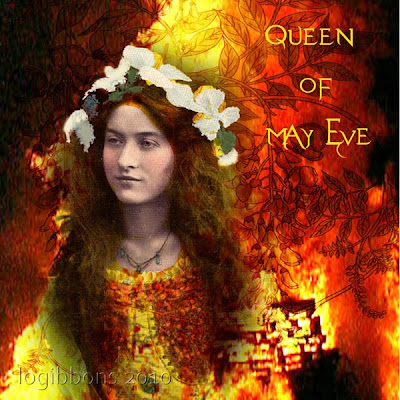 Beltane has long been celebrated with feasts and rituals. The name means fire of Bel; Belinos being one name for the Sun God, whose coronation feast we celebrate. Beltaine begins at sundown on April 30-May Eve, and ends at sundown the next day-May Day. As summer begins, weather becomes warmer, and the plant world blossoms, an exuberant mood prevails. In old Celtic traditions it was a time of unabashed sexuality and promiscuity where marriages of a year and a day could be undertaken.Lighting fires was customary at Beltane, and traditionally a Beltane fire was composed of the nine sacred woods of the Celts. All hearth fires were extinguished on Beltane Eve and then kindled again from the sacred "need fires" lit on Beltane. People would leap through the smoke and flames of Beltane fires and cattle were driven through them for purification, fertility, prosperity and protection.
Many people would rise at the first light of dawn to go outdoors and gather flowers and branches to decorate their homes. Women traditionally would braid flowers into their hair. Men and women alike would decorate their bodies. Beltane marks the return of vitality, of passion.
(From Wikipedia, herbalmusings.com & Wicca.com)

Images are from Elizabeth Golden, Dover and Google
Posted by Linda Gibbons at Friday, April 30, 2010