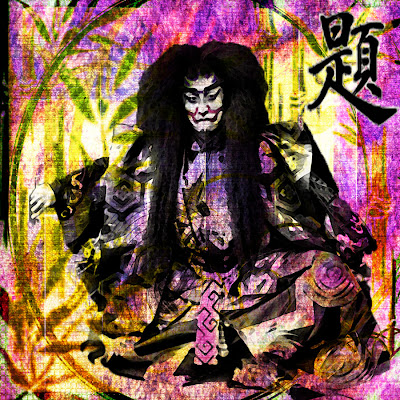 I've been on vacation for the last several days, so I'm just catching up now.

A great source of all things Asian (Chinese and Japanese anyway) is the Peabody Essex Museum, in Salem, MA. The museum's origins date to the founding in 1799 of the East India Marine Society by a group of Salem-based captains and supercargoes. Members of the Society were required by the society's charter to collect "natural and artificial curiosities" from beyond the Cape of Good Hope or Cape Horn. Due to the institution's age, the items they donated to the collections are significant for their rare combination of age and provenance.
The Peabody Essex Museum (est. 1992) originally the Peabody Museum of Salem and the Essex Institute, in Salem, Massachusetts is the oldest continuously operating museum in the United States, and holds one of the major collections of Asian art in the US; its total holdings include about 1.3 million pieces, as well as twenty-four historic buildings.

This photo of a Kabuki actor is from their collection.
The background is made from pieces by Elizabeth Golden, Peggy Gatto and Untamed Reflections. The calligraphy is Japanese for chief actor, or "Star."
Posted by Linda Gibbons at Friday, July 22, 2011