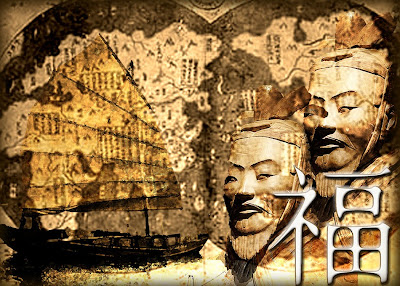 A Map of the World

The brave seamen whose great voyages of exploration opened up the world are iconic figures in European history. Columbus found the New World in 1492; Dias discovered the Cape of Good Hope in 1488; and Magellan set off to circumnavigate the world in 1519. However, there is one difficulty with this confident assertion of European mastery: it may not be true.

It seems more likely that the world and all its continents were discovered by a Chinese admiral named Zheng He, whose fleets roamed the oceans between 1405 and 1435. His exploits, which are well documented in Chinese historical records, were written about in a book which appeared in China around 1418 called “The Marvellous Visions of the Star Raft”.

A map, dated 1418, contains notes that substantially match the descriptions in the book. Six Chinese characters in the upper right-hand corner of the map say this is a “general chart of the integrated world”. In the lower left-hand corner is a note that says the chart was drawn by Mo Yi Tong, imitating a world chart made in 1418.
Posted by Linda Gibbons at Tuesday, August 09, 2011