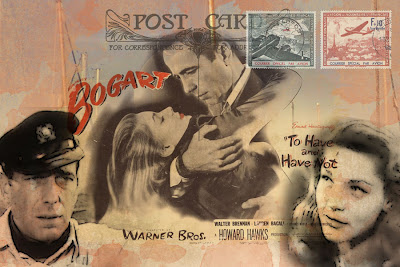 To Have and Have Not is a 1944 romance-war-adventure film. The movie was directed by Howard Hawks and stars Humphrey Bogart, Walter Brennan, and Lauren Bacall in her first film. Although it is nominally based on the novel of the same name by Ernest Hemingway, the story was extensively altered for the film.
This was Lauren Bacall's first film, at the age of 19.  After filming began, a romance developed between Bacall and Humphrey Bogart, despite the disapproval of Hawks. This romance eventually led to the end of Bogart's third marriage and to Bacall and Bogart getting married.
Bacall's part was greatly extended to take advantage of the Bogart-Bacall chemistry, especially in the legendary "You know how to whistle, don't you, Steve? You just put your lips together and... blow"
(from Wikipedia)

This movie also contains my own favorite quote; as the wife of the wounded resistance fighter first sees Bacall coming downto the cellar to assist she says accusingly, " who are you?!" Bacall answers in her inimitatable way, "...nobody...just another volunteer..."
Posted by Linda Gibbons at Saturday, February 04, 2012