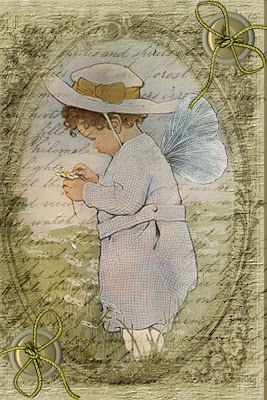 Here's my piece for this week's challenge--Vintage. It's based on the art of Jessie Wilcox Smith, an American illustrator fron the early 20th Century.She wasfamous for her work in magazines such as Ladies Home Journal and for her illustrations for children's books.

Born in Philadelphia, Pennsylvania, in 1884 Smith attended the School of Design for Women (which is now Moore College of Art & Design) and later studied at the Pennsylvania Academy of the Fine Arts under Thomas Eakins, graduating in 1888. A year later, she started working in the production department of the Ladies' Home Journal, for five years.

She was a prolific contributor to books and magazines during the late nineteenth and early twentieth centuries, illustrating stories and articles for clients such as Century, Collier's Weekly, Leslie's Weekly, Harper's, McClure's, Scribners, and the Ladies' Home Journal.

Smith may be most well known for her covers on Good Housekeeping, which she painted from December 1917 through March 1933. She also painted posters and portraits. Her twelve illustrations for Charles Kingsley's The Water-Babies (1916) are also well known.(Wikipedia)

The frame is from Frannie60 at Frames for Use Flickr group, and the text is courtesy of the Graphics Fairy.
Posted by Linda Gibbons at Wednesday, October 13, 2010